200
swing
You are here: Home » About » Bullathon Organizers 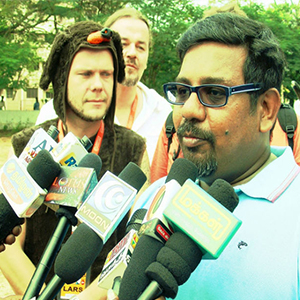 The Men in White Coats have come to take you away…. this is going to be awesome.

The Travel Scientists was the result of a stroke of genius, mild fever, and sleep deprivation upon the mind of our founder – Aravind. Whilst hurtling through the eye of a sandstorm inside an antique Lada in rural Mauritania, inspiration struck him squarely in the brain and said…

“Well…this is a start. Now how do we make this entirely more amazing?”

The young Indian adventurer gathered together a super team of like-minded experts in unconventional travel and international shenanigans, and so formed The Travel Scientists, probably known better to you as the Bullathon organizers!

A few weeks later, the very first ‘Rickshaw Challenge’ exploded onto the scene. Almost literally. The pageantry, noise and benign insanity of this inaugural rally across India in the depth of the monsoon season set the tone for what was to come.

Soon adventurers from right around the world had heard of this band of madcap motorized misfits. In 2008, to meet demand and plan ever-greater rallies, we established our offices all across the globe, from Budapest to Chennai. Today our rallies reach from the jungles of Tamil Nadu to the frozen shores of the Baltic Sea, from the steppes of Central Asia to the Caucasus Mountains, along the Silk Road to The Roof of the World, and all the way back to the Mediterranean coast.

There might be days when the Travel Scientists forget to wear pants, but there is absolutely no one in the world better or more dedicated to the study, development, creation, and sharing of incredible adventure travel. Aravind is the… let’s say ‘the brain’ behind the formation of The Travel Scientists, particularly the very first Rickshaw Challenge rally. He is the master organizer and logistician, and has racked up a truly staggering amount of miles rallying across Africa and Europe. Many of them were in the right direction. If there’s a motor vehicle, something that might be roughly described as a road, and a party at the end of it, then you can almost guarantee Aravind will be there at least once.

Guy is among the most technologically experts of the Scientists. He coordinates all the activity and planning of massive international events as a rally requires. No matter how chaotic things get (and from experience, they usually do), you can find Guy with a smile and a quick answer to get things back on track. Attila, like his ancient namesake, is a true road warrior. Throw a dart at a map and you’ll see that Attila have probably rallied there, and not just in a conventional way but using a Soviet-vintage Lada to mount the Steppes or a full size articulated city bus to blaze across the Sahara. He used to be an advertising executive until the lack of things on fire bored him. He is still an expert in complex inter-national organisations and speaks Corporate too. Nothing hinders Attila’s good humour since he can handle everything from tyrannical border guards to grumpy nomads with a smile. Princely is the Travel Scientists’ permanent Indian operative. An adept at the intricacies of getting things done in the Indian system, he has become an invaluable Agent, Inventor, and Fixer. By training a printer and book-binder, by accident Rice-cake Eating Champion, and by vocation a legendary Travel Scientist.

This is an amazing adventure unlike any other on the planet. Climb on board - we’re setting off…